Officers from 10 western Susquehanna County fire companies attended a dinner and safety discussion hosted by Cabot Oil & Gas on March 20. Looking over the items given to each of 17 fire companies in Susquehanna County by Cabot Oil & Gas at the event last week are (above, left) Hop Bottom fire chief Pete Mecca (left) and assistant chief Mike Karhnak.

As natural gas drilling escalates in Susquehanna County, so too does the amount of traffic associated with the industry and the need for first responders to be prepared for a variety of scenarios. Though such situations are uncommon and, in fact, extremely rare for the region’s biggest producer, the management of Cabot Oil & Gas Corporation feels that maintaining strong ties with fire and ambulance companies benefits the community at large.

For a second year, Cabot invited officers from fire departments across the county to catered dinners on March 20 and 21 at which they thanked them for the support they have received so far and fielded questions and concerns to help those in the industry and first responders build upon that relationship. Additionally, Cabot gave each department new equipment and supplies to help ease the burden on their limited budgets. 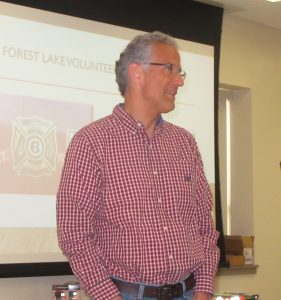 “We’ve started a conversation, and it’s continuing,” said George Stark (above), Cabot’s external affairs manager, who encouraged attendees to never hesitate to ask for guidance or assistance. Stark explained that production will continue to increase in Susquehanna County and continue for many years. Ensuring that company leaders and first responders fully understand each other will become even more crucial, he maintained. “The longer we are here, the more we learn.”

The focus of Cabot’s operations has also changed, said Bill desRosiers (below, right), Cabot’s external affairs coordinator. The first phase was exploration, followed by production. Now, the company is concentrating on new, local users for natural gas. “We’ve positioned northeast Pennsylvania for some exciting decades ahead,” he stated. In addition to making natural gas available to more homes and business, Stark added, more of the product is being used by power plants to produce electricity. 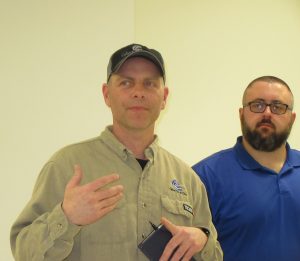 Steve Watson (above, left), Cabot’s environmental health and safety specialist, noted that Cabot employees logged more than one million miles on area roads last year without any accidents. Safety, he explained, is considered a “value” by the company. Safety training is an ongoing function, and fire and ambulance personnel are involved whenever possible. While the company is doing everything possible to reduce accidents and the need to call on first responders, they have come to rely on them for onsite health issues.

In the past year, there were at least two incidents of workers experiencing chest pains, Watson related. Whereas fellow employees might have previously decided to drive the victim of a cardiac scare directly to the hospital, “Now, we encourage them to call 911,” he told those in attendance. “You are better qualified to address those needs.” 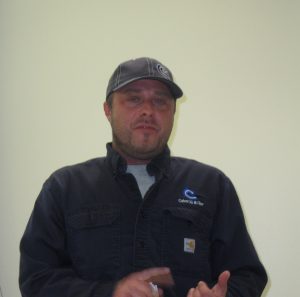 Most, if not everyone at the dinner on March 20, agreed that tanker traffic continues to be the biggest impact on the community and is the element of operations that generates the most calls for fire departments. Chad Gorman (above), operations manager for Gas Drilling Services Corporation (GDS), related that only eight accidents were reported in 2018 in the course of moving 35 million barrels of water. Seven of those were mere fender benders involving other motorists running into water trucks.

“We get hit from behind a lot,” he noted.

Nonetheless, Gorman said of GDS, “We have an exceptional safety record.” The company is contracted by Cabot to handle water recycling. GDS has 90 of its own drivers on the road and intends hire about 90 more people this year. In addition to their required CDL certification, new hires participate in a four-week mentoring program to teach them both equipment use and proper road etiquette. Not only did GDS adopt Cabot’s safety standards, Gorman explained, the company expanded upon them.

Hop Bottom fire chief Pete Mecca was among attendees who returned positive feedback on the efforts of Cabot and GDS, noting that GDS is quick to stop tanker traffic or reroute the trucks in the event of a non-gas-related accident. “They’ve even come down and stopped traffic for us,” he remarked.

Rush Fire Department chief Tom Jauss asked if private water haulers contracted by Cabot and GDS and those that supply sand for fracking conduct the same level of safety training, to which Watson replied, “not always.” Their trucks also do not not have the GPS tracking devices that are installed on all Cabot and GDS vehicles, he related. “But we are working toward that.”

“We’re not there yet,” Stark agreed, adding that he and desRosiers have halted the operations of particular contractors against whom a complaint has been lodged to talk about public relations. “We’re not going to put up with shenanigans,” he continued. “We have run people off who were not operating at our standards.” 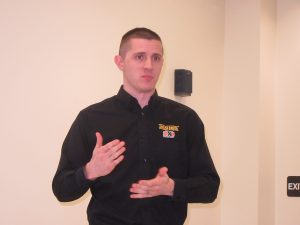 BX3 Taylor Rental was credited for coordinating the purchase of this year’s gift packages, which included portable scene lights, adjustable vests, extrication gloves, helmet lights and flame resistant pullover hoods. BX3 vice president of operations Phil McKeon (above) related that, as his company continues to work with the vendors that supply emergency equipment and apparel, he is able to get better deals, stretching the $55,000 budget allotted to him a bit farther this year. Cabot also set up an expense account in the amount of $500 for each of the 17 companies that received items this year.